While the name may sound cute, don’t be fooled. This automatic pool cleaner is more helpful than anything you’ll find in your local toy aisle, and it’s a good thing too. Those pool bottoms can get absolutely filthy with leaves and other debris finding there way into your pool.

Continue reading our review to see if the Aquabot Pool Rover Junior is the right tool to help keep your pool clean:

How does the Pool Rover Junior Work?

The Aquabot is a lightweight unit made mostly of plastic, with non-marring wheels that are set out wide from the body of the cleaner for extra stability. A 40-foot floating cable that connects to an EZ Swivel mount prevents crimping and tangling as it cleans.

Its 2-micron fabric filter bag will catch dirt that you won’t even be able to see without some serious magnification. The jet-drive propulsion will have it zipping around the bottom of your entire pool to clean it within the hour. 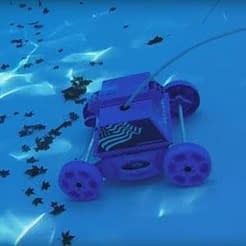 The unit cleans your entire pool, of any size or shape, in different patterns according to a small metal pin that you have to manually insert into one of the four holes provided for it. Remembering to change this pin around every time you use the unit can get to be a tad bothersome, but really its a small price to pay to not have to for the convenience of have the Aquabot do the work for you.

Once that’s done, you simply start it with the push of a button and let it do its thing: there are no hoses to connect, no extra instructions to adhere to and worry over, and it has an automatic shutoff timer set for two hours, so even if you forget about it working diligently to keep your pool clean, it won’t eat you out of house and home through your electric bill.

Will it work in My Pool?

Despite the fact that it’s marketed solely for above-ground pools, it’s quite effective on in-ground pools as well, as long as the incline isn’t too steep for it to make its way up.

Concrete flooring is said to be fine as long as it’s glazed, and the positively feather-light weight means you won’t have any problem taking it in and out of the pool.

What is the downside to the Pool Rover Junior?

Of course the Aquabot Pool Rover Jr does have some flaws and there are a few problems that have been reported by numerous users. Concerns have been raised over the thin plastic axles that the wheels are mounted on, and whether or not they might be prone to breaking under the stress of suction and the weight of the filtered material, but so far those fears have not been proven reality.

The most prominent of these problems that actually happen is that the fabric filter bag needs to be cleaned after every use to prevent clogging and rot. While this is an expected task that comes along with owning any robotic pool cleaner, it still managed be the most bothersome issue with this unit according to customer reviews. Of course, there’s always some amount of upkeep expected for things like this, so it’s lucky that this one is so low maintenance.

Then there’s the another issue that even though the cord is mounted on that EZ Swivel, it still sometimes manages to get tangled and crimped. It’s almost a requirement that you sit out on a lawn chair and keep a close eye on it, but then again, in the middle of summer you’re probably already doing that anyways.

In addition to these only irksome things, there is the rather worrying fact that the large yellow power converter isn’t waterproofed in the least. Putting a plastic bag around it is out of the question since the box needs to vent to prevent overheating. Owners must remember to put it away or under an awning before a thunderstorm hits.

What Customers Are Saying...

I have had this pool cleaner for 3 years now and it doesn't fail to perform year after year. It cleans my entire 27 foot pool and rarely misses a leaf or stick. I bought an extra filter for it so that I could let it clean the pool and if I wanted to run it again in a day ...

Not many options on automatic cleaners for above ground pools. This one does the job. Some of the smaller particles get left behind because the unit moves pretty fast and only slows adequately as it fills but overall does a good. Not sure about longevity but so far so good...

The Pool Rover Junior is one of the least expensive automatic pool cleaners on the market so it lacks some of the features found in higher end models. With that said, looking over the list of issues associated with this particular unit they seem rather minuscule compared to the overwhelming value and convenience of the rover. It will save you time and money, it also will not throw out your back or knee trying to heave it out of the water like some heavier cleaners.

The Rover Jr. unfortunately does not clean walls but that means it will not stall out like some of the other automatic pool cleaners on the market. As long as you remember to clean to filter, change the pin, and bring it in after every use before that next summer storm hits, we predict that you won’t have any regrets or troubles at all with buying this unit.

Aquabot Pool Rover Jr. review was written by Chris Smith.  Chris resides in Canada and is studying for his B.A. in English. He also writes for his own site at http://readingrenditions.ca/.

BOT BATTLE: PETKIT Pura X vs. Litter-Robot 3Two of the leading self-cleaning litter boxes on the market face off head-to-head to help you decide which one is right for you and your cat!When it comes END_OF_DOCUMENT_TOKEN_TO_BE_REPLACED

HOBOT 388 Window Cleaning Robot Review Window cleaning is not fun - in fact, it sucks! But what if there was a robot that could do the window cleaning for you? HOBOT 388 HOBOT 388 END_OF_DOCUMENT_TOKEN_TO_BE_REPLACED