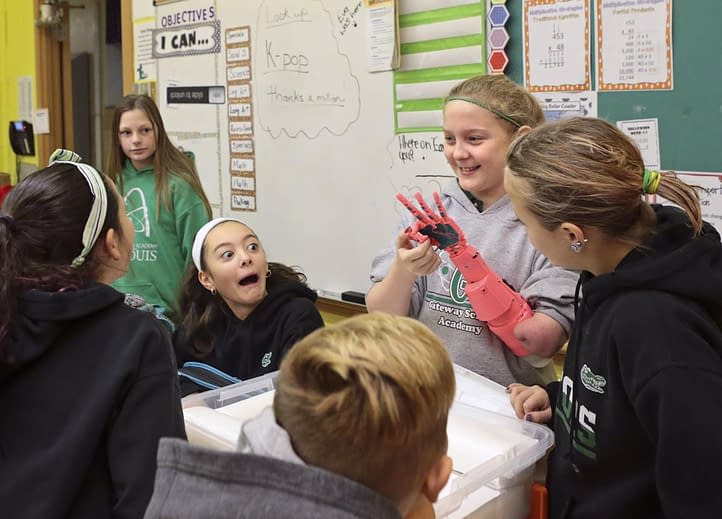 At diditBot.com we usually review robotic technology that enhances our lives by doing household chores for us.  While having a robot that vacuums our floors or cleans our windows is helpful, those improvements seem minor to the advancements the researchers at the Washington University School of Medicine aim to make to the lives of children missing limbs.

Raising Accessibility by Lowering the Cost

In recent years robotic prosthetics have been helping veterans who have lost limbs on the battlefield. However at a cost of $25,000 to $50,000 making them for children who quickly outgrow them seems somewhat impractical.

The lab at Washington University have gotten around that obstacle by creating a plastic arm for only a few hundred dollars using a 3-D printer.  The arm incorporates most of the same technology as the more expensive prosthetic. It uses myoelectric sensors that can detect contractions in the muscles of the stump signaling the prosthetic to move.

Other labs try to make the robotic prosthetics function as close as possible to biological limbs which raise the cost.  Washington University has set their sights on lowering the cost by being able to make and modify the prosthetics more quickly than their more advanced counterparts.

Biggest challenge is not what you think

Surprisingly the biggest challenge to robotic arms for kids is not the technology but what researchers call the “Sydney Syndrome”.

The “Sydney Syndrome” is named after Sydney Kendall who lost her arm in a boating accident.  Engineering students working on a senior project that involved creating a prosthetic arm from a 3-D printer made an arm for Sydney.  Appreciative of the student's effort, Sydney used the arm for a time.  However her robotic arm proved cumbersome to wear and hard to use. Being more comfortable using her stump, the new arm sat collecting dust.

Children born without a limb or who have become accustomed to the missing limb present an even greater challenge.  Only 20 percent of the more than 500,000 Americans missing upper limbs use a prosthetic. This low percentage is due to many have become so proficient at using their stump switching to a prosthetic arm adds little benefit to their lives.

A Post Bulletin article tells the story of Delanie Gallagher, 10, who received the Washington University created robotic arm. She has had prosthetic arms in the past but had little use for them.  Her first arm helped her crawl but Delanie's mother said it didn’t take long before she tossed it aside.

Missing part of her arm has not slowed Delanie at all; she has learned to color, braid or put her hair in a ponytail, use scissors and play the piano using her stump.  The researchers hope to overcome the “Sydney Syndrome” by listening to patients and improving upon the prosthetics depending upon the user’s needs.

It is said that children are our future and as technology advances it is becoming apparent that robots have a place in that future as well.  To see them both advance each other is a wonderful sign that the future is a bright one.

BOT BATTLE: PETKIT Pura X vs. Litter-Robot 3Two of the leading self-cleaning litter boxes on the market face off head-to-head to help you decide which one is right for you and your cat!When it comes END_OF_DOCUMENT_TOKEN_TO_BE_REPLACED

HOBOT 388 Window Cleaning Robot Review Window cleaning is not fun - in fact, it sucks! But what if there was a robot that could do the window cleaning for you? HOBOT 388 HOBOT 388 END_OF_DOCUMENT_TOKEN_TO_BE_REPLACED